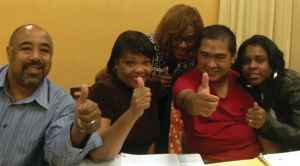 About 100 Registered Nurses at Kindred Hospital South Bay in Gardena voted 85 percent in favor of joining together in SEIU Local 121RN on April 25.  The RNs (and all of the Kindred South Bay workers) have already elected their Bargaining Team and started bargaining their first contract.

“Caring for our patients is a big source of pride for us and we’re determined to give them – and the rest of the community – the best possible care,” said Melito Lustre, a Certified Nursing Assistant at Kindred South Bay Tri-City in Hawaiian Gardens. “By joining the union, our experience and voice as healthcare workers means a lot more in making decisions that affect patients every day.”