Registered Nurse members of SEIU Local 121RN picketed in front of Garfield Medical Center on Cinco de Mayo (May 5) as part of their fight for a fair contract. The registered nurses at Garfield Medical Center and Greater El Monte Community Hospital are currently in contract negotiations with hospital management. Management has so far completely rejected our Union’s modest contract proposals.

Garfield and El Monte management has proposed to reduce the percentage increase between anniversary wage increases from 5 percent to 3 percent, effectively decimating the wage scale these dedicated RNs fought for and rightly deserve. Management also recently unilaterally reduced employee’s health insurance coverages. This has resulted in much higher costs to the RNs and coverage for some specialty medications, such as chemotherapy, are not covered at all and the employee must pay 100 percent of the cost out of their own pocket.

Click here to view a short video of the picket. 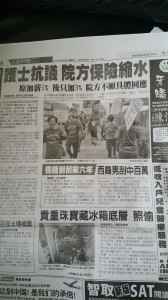